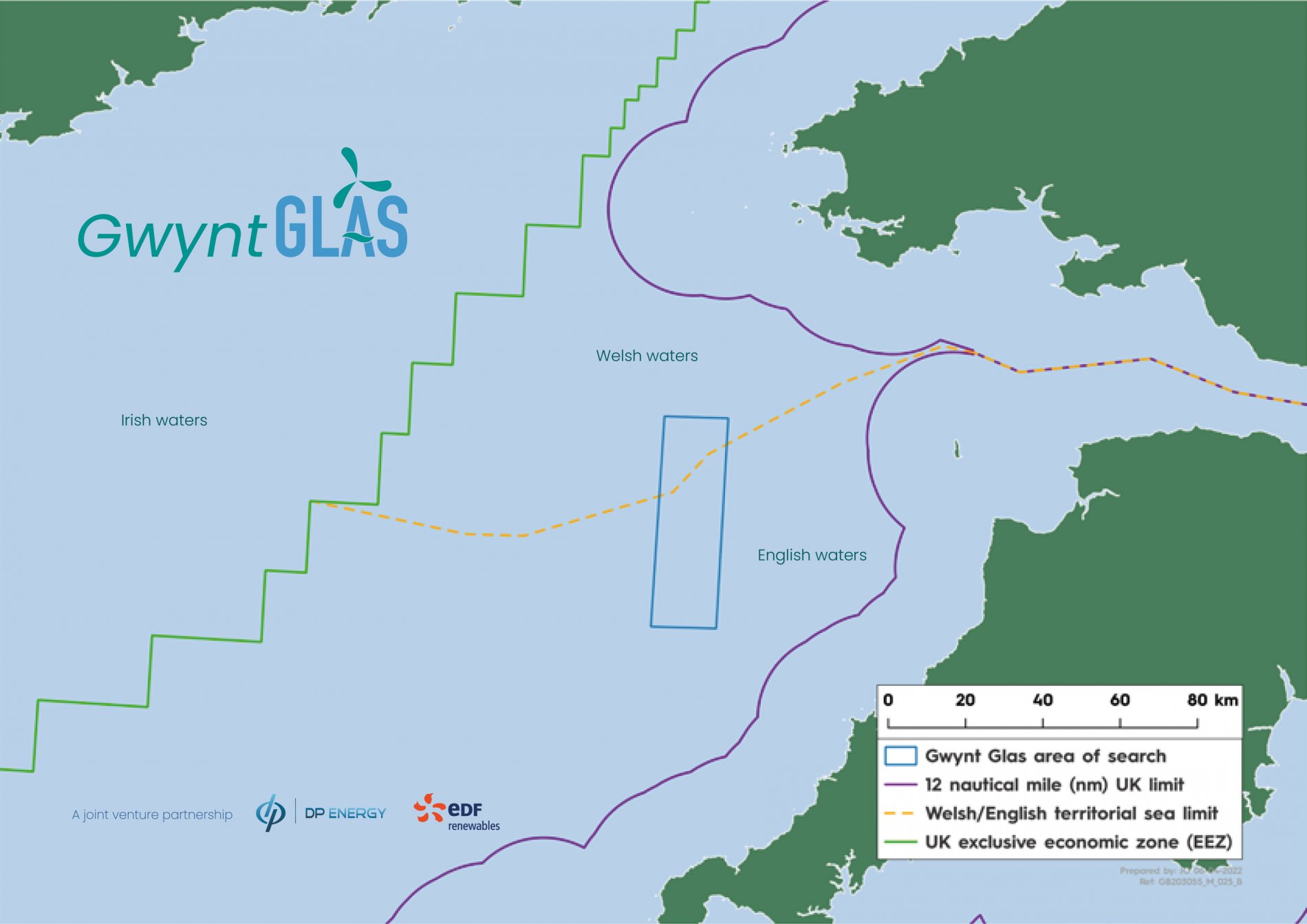 Early consultation is underway with the commercial fisheries sector as the team at Gwynt Glas reveal details of the location of their 1,500 square km site search area in the Celtic Sea.
Gwynt Glas, a joint venture announced in January between EDF Renewables UK and Pembrokeshire based DP Energy, will be capable of generating up to 1GW of low carbon green energy in the Celtic Sea.
The Crown Estate intends to run a competitive leasing round to award seabed rights to developers for floating offshore wind (FLOW) projects in the Celtic Sea, targeting an overall regional capacity of 4GW.
The Gwynt Glas wider site search area* is 70km off the coast of Pembrokeshire and 45km from the North Cornwall coast, spanning both Welsh and English waters. The project team will now consult with stakeholders to begin the process of refining the area for its proposed floating offshore wind farm ahead of preparing an application to lease the seabed later next year.
Nancy McLean, Gwynt Glas Project Director said: “In announcing the site search area at this stage we are keen to get an early understanding of the current level and type of fishing activity in the area. We are inviting those involved in fisheries to respond to our consultation and to meet us to discuss the opportunities and potential challenges.”
Beyond fisheries, a wide range of factors will also be considered as part of the site selection process, including water depth, wind resource, proximity to nature conservation designations, seabirds and marine mammals, shipping and distance from ports.
Remote aerial surveys for marine mammal and birds have been carried out over the last 12 months, and following wider consultation with all stakeholders, the floating offshore wind farm site will be refined and finalised to a much smaller area suitable to accommodate up to 1 GW of floating wind platforms.
Gwynt Glas will provide power for approximately 920,000 homes** and make a significant contribution to The Crown Estate’s ambitions for 4GW of capacity in the Celtic Sea.

** Load factors based on the five year rolling averages on unchanged configuration basis using Table 6.5 of ‘Digest of UK Energy Statistics’ – latest figures as per July 2019 release. Based upon the average domestic electricity consumption per home (temperature corrected) per the Energy Consumption in the UK (published July 2019, Table C9 of ECUK: Consumption data tables).

Those wishing to respond to the consultation or meet with the Gwynt Glas team should email Gwynt.Glas.FLO@naturalpower.com.